Hey Folks,
I mentioned in my last blog that I was going to try the X100 with a simple flash set-up...well I went a bit further than that and invested in a simple little adjustable led light-panel and set off for Marina Bay Sands Resort. Here is some background on what was only a partially successful shoot.
The Light - Panel itself was a S$ 158 purchase for SG Camera in Singapore http://www.sgcamerastore.com and is pretty basic in that it takes 5 AA rechargables and comes with 2 filters, one of which is a diffuser and the other an orange to balance tungsten light. The filters affix rather neatly with magnetic disks in each of the four corners. Additionally there is a dimmer control which would be nicely effective in daylight where the panel is being used to fill shadows or provide contrast. What sold me on this particular model ( F&V Z96 kit) was its quality of light which was by far the best of all of the cheaper kits I looked at and showed no signs of a color cast. Another benefit of this model is that it has a side clip to allow it to be banked with similar models to increase the light output. Overall, the construction is adequate and the filter system good but I think it needs careful handling and probably wouldn't stand up to prolonged hard usage. 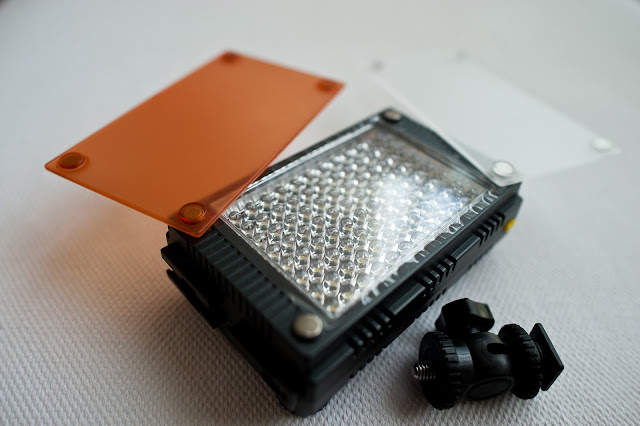 So how did it fare in use???
Firstly, the set-up. I started off with the light-panel shooting into an umbrella and to be honest there simply wasn't enough light so I then shot directly from the light-panel with only the diffusion filter supplied and then finally settled on shooting through the umbrella (see Bellow)

This is the effect when shot direct on full power through the supplied diffusion filter and to be frank, the results are not that great. Just as you would expect with such a small light source and similar to a raw strobe flash, the contrast is very harsh and it is inferior to flash in its light output. Only advantage for me was that it is obviously continuous light and therefore much easier to quickly adjust exposure. This is a very unflattering light and I can assure you that your models will not be happy with the results on their skin and features !!!! Even against the drop dead stunning sunset I had, this is a pretty poor result.

As I said earlier, next step was to introduce the umbrella again and shoot through it to soften the light. This gave a much more acceptable and softer light as you would expect however, the major downside of low output reared its head again and I had to drop to ridiculously low shutter speeds and 800 ISO on the X100 to get any kind of balanced light. By this time I was shooting as low as 1/15 th at f2 and needless to say loosing a lot of shots to motion blur. Having said that the X100 with its very soft shutter release and lack of mirror can be hand held at astonishingly low speeds, and as long as the model was still the results were ok.

There is of course a quirky side spin-off benefit of shooting at these low speeds which is that the ambient light is greater and therefore the background opens up and looks much better. I messed about with this for a while and decided that the best thing to do was backlight against the strong spotlighting that was still in place from Tuesday's National Day celebration and started to get some nice contrasty results which converted well into B&W.

This is the last of the color shots and you can clearly see the twin spots that were giving the nice backlight on the B&W shots. There is also the added benefit of some highlight rim lighting on the side of the face helping to define the model against the somewhat messy background of the National Day stage set.

As I said before, by now it was dark and I was moving into ISO 1600 at 1/20 and f2. You will read in various reviews that the X100 lens is a little soft wide open and this is largely true. Personally though, this is no big deal and we are not talking about extreme softness more a gentle lack of definition that, as you can imagine, is no bad thing when shooting models as it can give a nice glow. I did find that the shots were now looking better converted to B&W due to the strong backlighting and slight loss of contrast at the higher ISO's. All things considered though the little X100 dealt with this very well and I can think of no DSLR that would have given these kind of results at such low shutter speeds and high ISO. Only option would be something like the D3 with f 1.4 lens and of course that is against the principle of trying out the light-wieght travel kit.

The final two shots in this article are pretty similar and I really liked the way the backlighting defined the models face. Again, these are shot wide open at f2 and with the light-panel through the umbrella to soften.

Last model shot threw up a nice flare from the spots. This would have looked great as a starburst but that would of course have entailed stopping down the aperture quite a bit and, as I explained, there is not nearly enough light from the light-panel to do that.

So what is the conclusion from all of this????


Well, generally I am a bit disappointed. The Light-panel looked so bright in the shop that I thought it would do fine for reasonable close-ups but in reality it only worked either un-softened, when it proved too harsh, or softened through the umbrella where I had to keep it really close to the model and shoot at dangerously slow shutter speeds whereby I lost a fair 50-60% of shots.


Surprise of the evening goes to the X100 which handled admirably at high ISO's and very slow speeds. Shooting wide - open gave a very nice, gentle softness to facial features and worked well for portraiture. Surprisingly the 35mm equivalent lens is looking not bad either and it suits my style of trying to frame some interesting background or scene context within the shot.


It would be possible to bank the light-panels as I mentioned at the start but that would not appear to make sense for me and it would be better to carry any kind of decent speed-light. 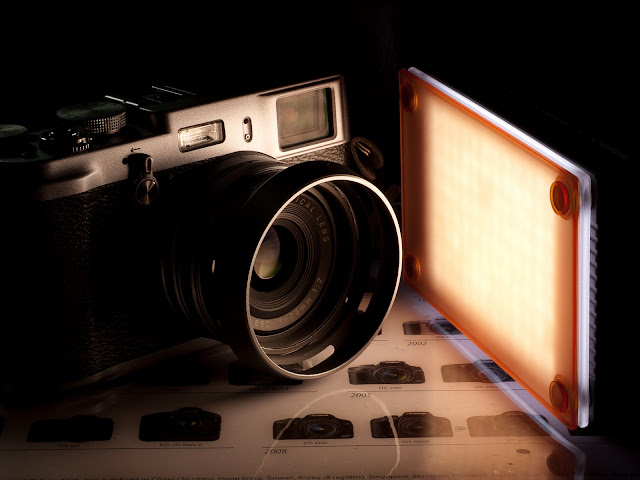 
I can see the light-panel having its uses for fill and its very light and extremely fast to set up and shoot with, I am going to mess around a bit more with it this weekend to see where I can push it. Ultimately though, its nowhere near a replacement for even the cheapest and most basic of strobes.


Thanks to my friends for their help and the ever patient Riyanti for volunteering to model, it all worked pretty well and we all learned from the shoot.


Hope this was useful to some of you and keep shooting,